Science and politics in bad climate 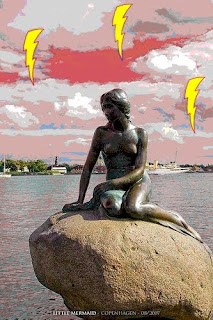 Nuclear waste, GMO, environment disasters and now climate change, every time science meets societal issues, every time science enters in the political arena, science is questioned beyond reason. Opponents to the widely accepted baseline are put forward by the media, the lobbies or by the political agenda. A few of them get the same media coverage than the thousand mainliners. After all this artificially noise, the popular conclusion is often "You see !! scientists do not agree" and the door is now wide open to arbitrary decisions.

Don't take me wrong I am not saying that science should not be questioned or criticised, that is the essence, the backbone of research. Any theory, any experiment, any numbers, any uncertainties are discussed extensively, put on trial, cross-checked before a consensus arises. This is the everyday concern of the scientists.

But with the "Climategate", the limits of "bienséance" against science have been outrageously overpassed. Once again the ugly face of scientifico-political politics takes the front page, once again scientific research is dragged along in the mud by lobbies and political activists, once again the true value of the scientific methodology and ethics is dumped into the black hole of ignorance and credulity.

"Climategate" reveals some of the means climate change deniers are using to attempt, a few days before the Copenhagen summit, to jeopardize years of efforts made by a large scientific community to study a complex and highly societal issue (see "On science and politics"Asymptotia Blog). On all this frenzy, little is said about the scandalous act of stealing private communications, throwing them in the face of the public with no context and using them to make up a case of scientific misconduct and trickery. This is an act of trumpery against humanity.

Climate change studies are like all scientific research: a glimpse into reality. But this is the best understanding one has of our world. Only sustained and systematic research will bring sturdier assessments, not political activism and e-mail robbery.

To fight against the manipulation of science, science and the society must meet, often, more often than currently done. The Copenhagen summit is a rare platform where research, politics, industry and the society gather and everything should be done to establish serene and objective discussions so as to strengthen the brittle links between these various communities. Let's hope intelligence will prevail and that these efforts will not be wasted by malicious and greedy arguments.
(BTW: On a more modest level, ASEPS, the first Summit on Physics "Physics towards Science Innovations" (March 2010) is meant to be another of these uncommon occasions.)
at 22:50