ILC in Japan: launch window open ... but time is running.. 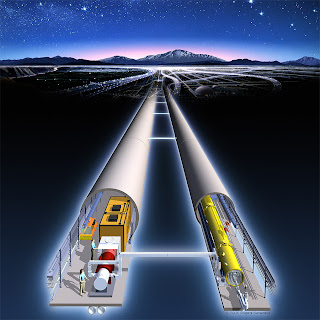 The ILC (International Linear Collider) project seems to be on its way to the launch pad.

After the showing up of a Higgs-like boson at CERN LHC Jul. 4th, the completion Dec. 15th of the TDRs (technical studies), the Japanese community proposal to host the machine in a first ever and true world-wide laboratory and the ruling party change in Japan Dec. 16th, all lights are green.

However, the final liftoff may never happen, if the international HEP community does not act pro-actively and coherently to back up this major fundamental research endeavor.
It is the responsibility of each of us supporting the ILC scientific case with the international committees and funding agencies to come up with a sound and balanced project and partnership.
A window of opportunity is now open, that may not last long, ... no time to waste, let's not replay the TESLA or, more recently, the SuperB  unfortunate scenario.

The CERN LHC has discovered a new Higgs-like boson and, so has set the energy scale for a e+e- precision machine, very much like the discovery of the Z and W at SPS collider led to the two energy phases of LEP.
The proton-proton physics is complex in part due to the compositeness of the proton and the recent uncertainty on the mass is an illustration of these difficulties.
Probably the most important way to identify "new Physics" beyond the Standard Model is the precise measurement of the Higgs couplings which will not reach, at LHC, the minimum 5%  required. In fact, 1-3% precision is needed to actually study or push further the limits of the new physics domain, only accessible to the ILC. LHC may unveil new resonances that again would set further goals for a precision machine. LHC and ILC are therefore complementary in the quest for new physics. As a first stage, ILC could very well start at the Higgs production energy, namely around 250 GeV and one could benefit from having both colliders operational at the same time.

The Japan scientific community, as a whole, pleads for the construction of the ILC in Japan. A group of industry leaders (AAA) together with scientists has been formed years ago to support the project and to work on its implementation. A bi-partisan federation of Diet members led by a formed prime minister from LDP has taken a strong position to support the project. The Japan Policy Council, a government independent but influential  think-tank, has recommended to build the ILC in the hope to open the regions to international cooperation and to build global cities.

Technically the project is ripe. On Saturday December 15th, in Tokyo, the GDE officially did present their conclusions in the form of technical proposals (for the accelerator and the detectors) to the head of the ILCSC. "Only" the costing was not included, in part because of its dependence on the site location. Two sites are proposed in Japan. The selection will be done soon and, it is expected that both sites will, in some way, benefit from the project.

With the new election last Sunday putting back in power the LDP after a 3 years ruling of the DPJ, the odds for an endorsement of the ILC in Japan by the government has been raised to a new level.

However, in high-energy physics, we have already experienced false hopes, Isabelle and SSC in the US, TESLA in Germany more than 10 years ago and very recently the cancellation of SuperB in Italy at least, as it was designed. Most of these failures can be traced back, in part, to a too weak commitment of non-host potential contributing countries. For example the Italian government was ready to invest 250 ME in the SuperB project, but the financial complement supposed to come from an international partnership to the total cost of 1 BE was not secured.

The Japanese proposal would be to shoulder 50% of the 500 GeV project budget with a 250 GeV first stage being ~ 30% cheaper.With the current LHC program and its upgrades and extensions on top of a serious financial crisis, the ends will not easily meet in Europe. Other Asian and American countries have similar and also specific constraints and issues which will impact the whole project. This is why the international research community involvement is most important, in particular, to steer the project to foreign partners acceptable and affordable waters and to demonstrate that knowledge research cooperation should prevail over other issues for a better future (see also in Nature).
The international ILC community is building up, see here or here in addition to the many contributors to the R&D and design phases. All efforts should be made to attract to the field more researchers, to strengthen, in each country, the policy and decision makers ILC awareness and to organize an international platform involving scientists, political and industry leaders to progress toward a global acceptance.

Beyond fundamental research, the ILC in Japan, possibly in a new global city, is a multidimensional project that will draw international cooperation to new heights, much beyond today practice. It will address social, cultural, political, environmental, energy or governance issues.